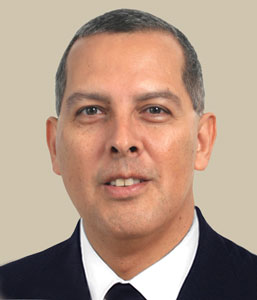 Mr. Gutiérrez graduated in Electrical Technology from Simón Bolívar University in Caracas. Since 1991, he has worked in preventive and corrective maintenance as well as in planning, inspection and supervision of maintenance on transmission lines from 115 kV to 765 kV. He has also had extensive experience in thermographic and UV corona inspection of lines and substation equipment, gained while working for Venezuela’s largest utility in generation and transmission.

Corpoelec’s 400 kV transmission system consists of 4300 km of overhead lines and more than 10,350 towers. Venezuela’s first transmission lines were built using glass and porcelain string insulators but application of polymeric insulators at 400 kV began in 1998. Currently, these types of insulators are installed on over 2500 towers along some 980 km of lines and represent about 23% of the total transmission system. In late 2016 a situation occurred involving non-ceramic insulators installed for 14 years on a 400 kV overhead transmission line. The problem occurred when there was a single-phase fault resulting from a brittle fracture process linked directly with not having installed corona rings on insulators during construction. The experience highlighted the importance of corona rings at this voltage level and also the need for proper visual inspection to be performed by linemen and technicians. This paper and presentation shows what can actually happen on transmission lines once equipment is put into commercial operation. The failure due to brittle fracture is carefully described, with the goal of documenting contributing factors, including period in service as well as external factors and environmental pollution that can reduce life expectancy.

22 Oct 2019
18:00
Canyon Conference Room
We use cookies to ensure that we give you the best experience on our website. If you continue to use this site we will assume that you accept the terms and conditions.OkPrivacy policy